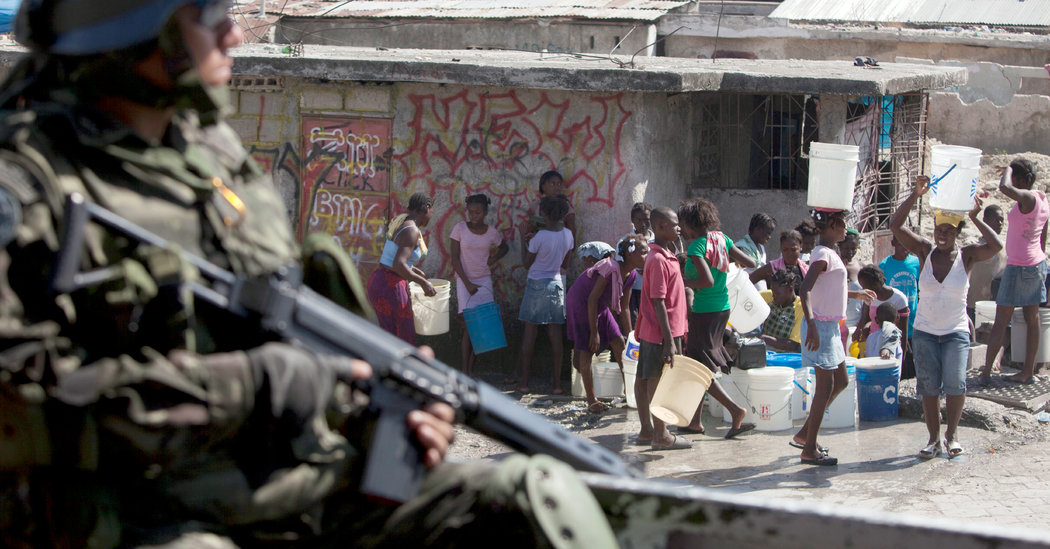 United Nations peacekeepers in Haiti fathered and left behind hundreds of children, researchers found in a newly released academic study, leaving mothers struggling with stigma, poverty and single parenthood after the men departed the country.

While the United Nations has acknowledged numerous instances of sexual exploitation and abuse by peacekeepers in Haiti and elsewhere, the study on Haitian victims went further in documenting the scope of the problem in that country — the Western Hemisphere’s poorest — than had been previously known.

“Girls as young as 11 were sexually abused and impregnated” by peacekeepers, who were stationed in Haiti from 2004 to 2017, and some of the women were later “left in misery” to raise their children alone, according to the study by two academic researchers.

“They put a few coins in your hands to drop a baby in you,” one Haitian was quoted as saying by the researchers, whose work was published on Tuesday by The Conversation, an academic website supported by a consortium of universities.

The study, based on interviews with 2,500 Haitians who lived near peacekeeper bases in the summer of 2017, depicts a trail of abuse and exploitation left by some of the soldiers and civilians who served in the United Nations peacekeeping mission in Haiti, known as Minustah, an acronym for its name in French.

The resulting children are known as “petits minustahs.”

Asked for comment, the United Nations Department of Peacekeeping Operations said in a statement that it took the issues raised in the study seriously and that combating sexual exploitation and abuse committed by peacekeepers is a top priority of Secretary General António Guterres.

“We have unfortunately seen cases involving Minustah peacekeepers over the past years, although allegations have been generally declining since 2013,” the statement said.

The United Nations has previously acknowledged that more than 100 Sri Lankan peacekeepers deployed to Haiti exploited nine children in a sex ring from 2004 to 2007, and the men were sent home, but were not punished.

The new study, by Sabine Lee, a history professor at the University of Birmingham, and Susan Bartels, a clinician scientist at Queen’s University in Ontario, is the latest to document sexual misconduct by international peacekeeping forces, including those stationed in Mozambique, in Bosnia, in the Democratic Republic of Congo and in the Central African Republic.

Of the people interviewed by the authors, 265 told of children fathered by members of the peacekeeping force, who came from at least 13 countries but mostly Uruguay and Brazil, according to a chart in the study.

“That 10 percent of those interviewed mentioned such children highlights just how common such stories really are,” they wrote. They noted that over the years, news organizations had reported anecdotal cases in Haiti in which “minors were offered food and small amounts of cash to have sex with U.N. personnel.”

The authors did not estimate the exact numbers of impregnated women or children left behind. But legal experts and aid workers say the problem has been pervasive, and that the United Nations has failed to assist the women.

The Bureau des Avocats Internationaux, a group of Haitian lawyers based in Port-au-Prince, has filed paternity suits on behalf of 10 children said to have been fathered by peacekeepers. Sienna Merope-Synge, a staff attorney at a Boston-based partner organization, the Institute for Justice and Democracy in Haiti, said the groups had approached United Nations officials in 2016 about securing child support for the mothers but had received none.

“The U.N. must be much more proactive,” she said. “It shouldn’t be on a woman in rural Haiti to seek transnational action for a man in Uruguay.”

Others were far more critical of the United Nations, seeing the Haiti study as another instance of what they called the organization’s male-dominated ethos. Paula Donovan, a co-founder and co-director of AIDS-Free World, a group that has frequently castigated the United Nations over sexual abuse and gender issues, said the study had corroborated her views.

“This research confirms that standard U.N. practice is to exploit women — from those subsisting in tents to those presenting at conferences — and then squash them like bugs if they dare complain about sexual abuse and threaten the U.N. patriarchy’s 75-year-old culture of entitlement and impunity,” Ms. Donovan said in a statement.

While some mothers told the researchers of sexual violence by United Nations personnel, most of the stories recounted subtler forms of coercion, with peacekeepers trading small amounts of money or food for sex with women and girls who were often desperately poor. In other instances, women and their relatives described consensual relationships that ended when the peacekeepers left Haiti.

The authors said Haitians residing in communities around 10 United Nations bases had been asked “what it’s like to be a woman or a girl living in a community that hosts a peacekeeping mission.” The Haitians were not asked specifically about potential abuse or sexual relations with peacekeepers, according to the study, but participants raised the issue themselves.

“I started to talk to him, then he told me he loved me and I agreed to date him,” a woman was quoted as saying of her relationship several years earlier with a peacekeeper. “Three months later, I was pregnant, and in September he was sent to his country.” She added that she could not pay the fees to send her son to school.

The testimonies echoed a pattern seen in Liberia between 1990 and 1998, when thousands of children were reported to have been fathered by international peacekeepers.

In Haiti, the peacekeeping mission began as an attempt to bring stability after the 2004 rebellion that toppled President Jean-Bertrand Aristide, and the United Nations extended it after a catastrophic earthquake ravaged the country in 2010.

But the mission itself was devastating, according to human rights organizations and researchers. Peacekeepers have been accused of unintentionally killing dozens of civilians, and some introduced cholera to Haiti after the earthquake, starting an epidemic that killed more than 10,000 people and sickened more than 800,000. The United Nations has apologized for its role in the epidemic but has resisted legal efforts aimed at compensating cholera victims and their families.

The study’s authors recommended that the United Nations educate its personnel about the economic and social hardships of the mothers and children left behind. They also urged the world body to stop simply repatriating its people who are implicated in sexual exploitation or abuse, rather than turning them over to local authorities.